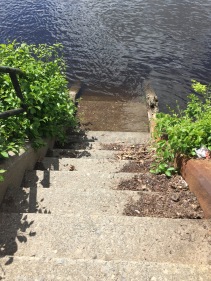 About six months ago, Adrien and I came to the realization that, despite 200+ channels offered by our favorite cable provider, we were more often than not finding little entertainment of value on television. Mostly we ended up watching television to “kill time” – not a particularly compelling reason for sitting in front of the tube after dinner.  And then, there was the over $200 a month bill.

So with that realization, we started to become intrigued with the idea of cutting the cord – getting rid of our cable television access. And yes, I do know boomers are notorious for not quite being on the cutting edge of technology. Yet we persisted.

The television we gravitated to really was a short list. Once we started to keep track of what we really wanted to watch on television, it was fairly easy to match up streaming providers (Hulu, Roku, etc.) to our habits. Although we had an older Apple TV, we upgraded so that we could take advantage of DVR capabilities offered by streaming providers like Hulu-live.

What we discovered was that we might lose one of the local (Boston) channels (WCVB). We also let go of local cable access coverage of meetings (yea, I was that person), and watch local PBS affiliate,  WGBH, via the Internet.  By choosing the more costly live-streaming packaged offered by Hulu (Hulu-live) we can still access local sports coverage (Red Sox!). Another advantage is that any changes to account types (i.e., from regular Hulu to Hulu-live) so far do not incur any penalties or change of service charges.

The feature we’ve had to get accustomed to is queuing up programs that we are interested in rather than channel surfing.  Our previously acquired Netflix account is easily accessed through an Apple TV app. Using Amazon Prime is naturally a little more difficult, but with a little more effort (Airplay and playing through an iPad) still accessible.

We kept the same Internet access speed (200 Mbps), curtailed landline and cable. By doing so, our monthly “entertainment” costs are about $60 a month less – nearly $1,000 savings a year. At this point we are still evaluating whether the “live” feature of Hulu-live is worth the $40/month charge; regular old Hulu (with limited commercials) is $12 a month. If we discover that live TV broadcast is not something we regularly watch, we’ll be able to cut our entertainment charges even more.

In my opinion, however, the greatest advantage for us is that when we do sit down to watch television, we’re doing so for a reason or with a particular show in mind. Reading, conversation, and dinnertimes are a lot calmer.  So far, so good.

One thought on “Boomers cutting the cord”